This article originally appeared on Gizmodo

With a new iPhone due out later this spring, the Apple rumour mill is hitting peak froth. Not only does 2017 mark the 10th anniversary of the iPhone, but after the iPhone 7 didn’t deliver as much of an improvement over the iPhone 6s as people expected, there’s a lot riding on Apple’s upcoming crop of handsets. So to give you the best idea of what Apple might actually announce this spring, we’ve sorted through all the whispers and hints on the net thus far.

What will they call it?

Currently, this is the biggest question about Apple’s upcoming phones. Based on the traditional Apple two-year refresh cycle, you’d normally expect to see an iPhone 7s and iPhone 7s Plus announced sometime this spring. What throws a wrench into that pattern are the deluge of rumours citing the existence of a third iPhone with even more premium features.

Noted Apple analyst Ming-Chi Kuo said he expects Apple to release a total of three models: “[O]ne OLED model, and two TFT-LCD models with 4.7-inch and 5.5-inch display.” Apple currently uses LCD displays in all its iPhones, but OLED is the display type found in many iPhone competitors and is known for its more vibrant colours and better energy efficiency. Kuo’s claim was later substantiated in a report from Bloomberg, however, neither Kuo nor Bloomberg mentioned potential names for either the LCD or OLED-equipped iPhones.

Some rumours attribute the OLED iPhone to the celebration of the iPhone’s 10th anniversary, but it could just be a new approach from Apple as it tries to close the tech gap between the iPhone and Android flagships such as the Galaxy S8 and Google Pixel.

For now, most of the rumours about new features and tech reference this third iPhone model. People have dubbed it the iPhone 8, although we wouldn’t put it past Apple to name it something like the iPhone Pro, iPhone X or iPhone Anniversary Edition either. While rumours haven’t mentioned anything about Apple radically redesigning the general shape of the iPhone’s rounded body, there are a number of significant changes that could be in store. The first is a new bezel-less design similar to that of the Galaxy S8. The S8 features a screen with an extra-wide aspect ratio that extends to the very edges of the device.

This development has been seen in a number of leaks and prototype mockups shown by Everything Apple Pro and Unbox Therapy, and has been all but confirmed by data found in new firmware for Apple’s upcoming HomePod speaker.

The new bezel-less screen would seemingly eliminate the Touch ID sensor that has traditionally been located below the iPhone’s display, with some rumours saying that Apple will get rid of the feature altogether. In its place, Apple may feature new facial or iris recognition technology that will allow you to unlock the phone using sensors that scan your face and eyes. However, getting rid of Touch ID may be a bit too premature, and I wouldn’t be surprised to see Apple hide it inside the logo on the back or build it into the new elongated side-mounted power button like this rumour from Weibo and BGR both suggest.

Another change on the iPhone 8 is rumoured to be around back. Instead of featuring dual cameras arranged horizontally across the rear of the phone, leaked schematics show dual cameras arranged in a vertical orientation. Functionally, arranging the cameras vertically could pave way for even longer optical zoom, but this vertical orientation would be a first for the iPhone, and as such has drawn a bit of ire from some iPhone purists. 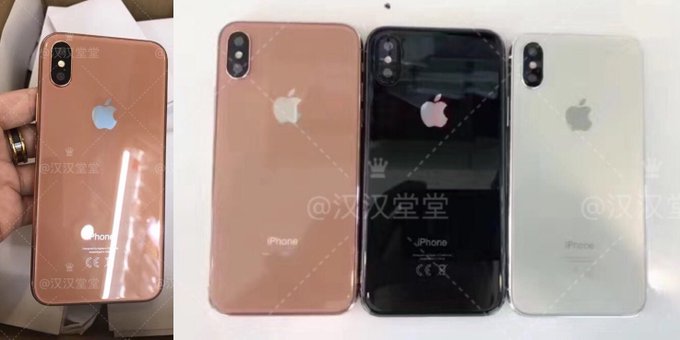 What’s going on with the guts?

For quite some time, Apple has been among the best when it comes to mobile performance thanks to its homegrown A-series CPUs. And if reports from Twitter user Ice Universe are to be believed, that trend looks to continue with Apple’s new A11 processor, which hit multicore scores of 7000 and 8500 while using two different clock speeds on the Geekbench 4 synthetic performance benchmark.

For comparison’s sake, in our testing we found that the Qualcomm Snapdragon 835-powered Galaxy S8 scored 6325 on Geekbench 4. That means we’re potentially looking at a phone with performance between 10 and 25 per cent better versus the fastest Android phones.

Aside from a new processor, the OLED iPhone 8 should also boast a larger 5.8-inch display according based on info from Ming-Chi Kuo. However, Kuo also added that only 5.15 inches of the screen will be usable, as the rest of the space will be reserved for onscreen icons and navigation.

Apple’s accidental release of the HomePod firmware prompted Steven Throughthon-Smith’s to go digging through and uncovering a lot of exciting pieces on the upcoming high-end iPhone, codename D22..

Additional info gleaned from the HomePod firmware indicates that the iPhone 8 will feature inductive wireless charging and fast wired charging for the first time. That will make this, potentially, the fastest charging iPhone yet. Other purported features include tap-to-wake functionality and maybe even the ability to recognise expressions on your face. MacRumorsalso uncovered the possibility that both the front and rear cameras will be able to record video in 4K at 60 frames per second. Currently, the rear camera on the iPhone 7 and 7 Plus are limited to 4K recording at 30 fps, while their front cameras top out at 1080p video.

On the health front, a new patent granted to Apple details the use of a phone’s front-facing camera, light sensor and proximity sensor to measure various fitness metrics such as pulse and oxygen saturation. There’s even a mention of using electrical contacts to measure body fat percentage or the electrical activity of your heart. However, this seems a bit far out to make it on this year’s batch of iPhones.

As on the iPhone 7, most signs point to the iPhone 8 having just a single Lightning port and no headphone jack. Way back in February, the The Wall Street Journal put out a report saying the iPhone 8 will sport a USB-C port instead of Apple’s Lightning connector.

Availability for the iPhone 8 is one thing no one can seem to agree on. Traditionally new iPhones are available in September. Yet the iPhone 8 could be the most complicated iPhone ever built, and for months now the curious shape of the OLED display has plagued the device with rumours of delay. Some analysts, including Steven Milunovich of UBS, claim actual availability for the OLED iPhone 8 will be delayed until well into October or later.

If you start aggressively saving now you might even be able to afford it.

Tom has been writing about the iPhone since 2007 and is well known as an expert in his field with multiple blogs and numerous articles being published on technology and mobile phone websites.